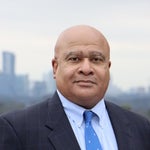 Marvin A. Devlin is a 1983 graduate of Harvard Law School and was admitted to practice law the same year. He began his career at one of the premier trial and litigation firms in Atlanta Georgia, eventually becoming a partner. After practicing there for 17 years he left to open his own firm and continued his litigation and trial practice.

The cases in which he has been involved number in the thousands. He has tried an overwhelming number of cases in many if not most of Georgia's legal jurisdictions, counties, and judicial circuits including all Federal Courts in Georgia. On several occasions, he has tried cases that have lasted one week, two weeks, three weeks, a month, and even three months. He has argued cases before the Georgia Court of Appeals, Georgia Supreme Court and the Federal Eleventh Circuit Court of Appeals.  In his career, he has represented numerous Fortune 500 companies, Georgia corporations, hospitals, physicians, and other defendants when they were sued in Georgia courts. He now devotes his practice to representing individual plaintiffs and their families when they have been injured or treated badly by the negligence or wrongful conduct of others. In doing so, he brings his extensive knowledge, experience, and skill to bear to fight for his individual clients just as he did while representing some of the largest corporations in America.

Thank you for contacting us. We will get back to you shortly.

Please complete all required fields below.

We'll gladly discuss your case with you at your convenience. Contact us today to schedule an appointment.